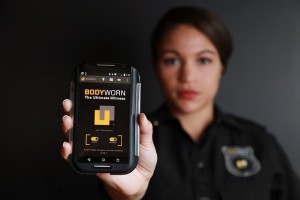 Almost a year ago we posted an article about the Baltimore Police mulling the use of wearable cameras for patrol officers in order to promote transparency and reduce police misconduct. Many predominately urban police departments around the country had at that time already installed body camera programs, including the Laurel police department in Prince George’s County. Less than six months after that article the Baltimore Police Department was the headline of every news outlet in the country after the death of Freddie Gray and the riots that followed. This negative media attention only served as further motivation for the shamed department to end the perception that their officers have little regard for the citizens they serve. Whether the riots actually convinced city politicians to act is a moot point, as the powers that be put ball in motion earlier this week. On Monday the city launched a two-month test program that will equip more than 150 city police officers with digital body cameras. The cameras come from three different manufacturers that are all competing with each other to win the contract to supply the whole force, and with over 3,000 officers this is bound to be a highly lucrative deal.

The pilot program was announced at a news conference from police headquarters, but the department declined to go into detail just how it will be managed. Rather, police officials simply laid out a basic overview and explained that final regulations are still in draft status. This tight-lipped approach did not sit well with media members and local politicians who have been critical of the department.   Some have questioned the motive behind withholding the details of a program that was specifically designed to promote transparency. What the department did divulge is that the select group of 150 officers is from the east, west, and central districts. These officers will be instructed to activate their cameras upon making contact with civilians, and they themselves will be the ones responsible for uploading the footage to offsite cloud based servers managed by the camera vendors. Civilians may ask the officers to turn of their cameras, although it is unclear when the cops will actually adhere to theses requests. It is also unclear what types of safeguards are in place if an officer fails to upload video footage, or if a camera is damaged or destroyed.

Although the department’s reluctance to share the details of the pilot program certainly seems odd and even a bit hypocritical, it does not seem like a major cause for concern at this point. There are many unknowns right now, and at this point the city has not chosen a camera supplier. Each of these camera systems will have numerous distinctions, so the value of spending time fine-tuning regulations is minimal at this point. The city is better served putting the program in motion and gathering data to make their final decision. Those responsible for drafting the final policy regulations will learn a lot over the next two months, and the Blog will be following closely when it comes time to choose a specific camera system. We may post an article at that time, and an update this spring when body camera legislation is bound to hit the floor of the state legislature in Annapolis.

Benjamin Herbst is a Baltimore criminal defense lawyer who handles cases in all state and federal courts in Maryland.  Contact Benjamin about your case anytime at 410-207-2598.