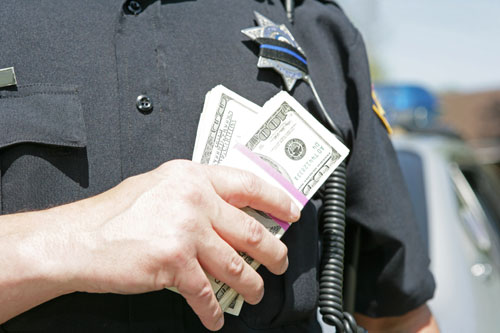 The FBI and the United States Attorney for the District of Maryland recently announced that a 36 year-old Baltimore Police officer has pleaded guilty to multiple drug and gun felonies. The investigation began in early 2012 when the feds received information from an anonymous source that the crooked cop was trafficking in stolen property. As a result of the tip and other corroborating information, feds secured a warrant to wiretap the officer’s cellphone. Through the wiretap law enforcement learned that the officer was selling stolen iPhones, iPads, and other electronics, some of which were confiscated during arrests and never submitted into evidence. Federal investigators also became aware of a new development, that the officer was involved in a more sophisticated and organized criminal scheme with a street level drug dealer.

This sort of police activity, minus the doctoring of police reports, is commonplace and does not sound overly egregious. But the shamed ex-cop was not satisfied with simply providing protection in exchange for the opportunity to make easy arrests. What made this case particularly “treacherous”, as the FBI called it, was that the officer went so far as to plan out a series of robberies that involved the confidential informant. On one such occasion, the officer made an illegal search on a person and located a large amount of cash. The man was not arrested, but was detained until the confidential informant was contacted and told about the man’s whereabouts. The informant then robbed the man at gunpoint after he was released. There were other instances as well including one where the informant planted a gun in an unlicensed cab or hack, and then the officer pulled the cab over and made an arrest.

The former Baltimore cop faces 5 to 40 years in prison for the drug conspiracy charges, and an additional 5 years to life in prison for using a firearm to further a drug trafficking crime. Sentencing is scheduled in the United States District Court for June 11th of this year. As a result of the officer’s felony conviction, dozens of criminal prosecutions in which the officer was involved could be in jeopardy. Any open case where the convicted cop was the arresting officer will likely be dismissed, and closed cases could be subject to a successful appeal by the defendant.

Benjamin Herbst is a drug crimes lawyer who handles cases throughout Maryland. Contact Benjamin at The Herbst Firm for a free case evaluation and consultation.