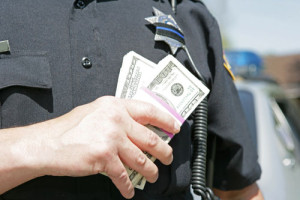 A Maryland State Trooper with more than 10 years of service has been charged with several federal felonies for attempting to tip off a drug dealer about ongoing investigations in exchange for cash.  The trooper was arrest by the FBI and now faces charges including bribery, conspiracy to distribute controlled dangerous substances, using a communications facility to commit a drug felony and aiding and abetting in the distribution of controlled dangerous substances.  The affidavit used to charge the trooper was heavily redacted due to the ongoing nature of the investigation and other considerations, but the public recently became aware of the general nature of the trooper’s alleged unfortunate course of conduct.  What we do know is that the trooper was assigned to the Criminal Enforcement Division Western Region Narcotics, which works closely with federal law enforcement agencies such as the DEA and FBI.  Western Maryland counties including Washington County and Frederick County have been identified by the feds as drug trafficking hot spots, and therefore receive federal funding for ramped up law enforcement activity.  The Narcotics Task Force in Washington County is another example of a state law enforcement agency (Washington County Sheriff’s Office and Hagerstown Police Department) that works closely with the feds.  This particular trooper attended high school in Frederick County and achieved the rank of Corporal before being placed on administrative leave due to the investigation.  The accused was also a recipient of a trooper of the year award for the Salisbury Barrack in 2013.

At some point during an investigation into a Drug Trafficking Organization or DTO that was operating in the Hagerstown area, the trooper reached out to a suspect looking to profit off of law enforcement information.  The trooper relayed that he had information about GPS tracking devices being placed on cars, future search warrants and later a potential wire-tap.  It turns out that the wire-tap information was fabricated by the government in an attempt to weed out the leak from within the law enforcement team working the case.  The government’s theory based on the affidavit in support of the criminal complaint seems to be that the trooper was in severe debt, with credit card payments and loans exceeding $67,000, and was desperate for cash.  His desperation caused him to strike a cash for information deal with a drug dealer who was under federal investigation.  The dealer was likely a cooperating witness for the government, but at this point there is no information to rule out that he/she was an undercover law enforcement officer.

After a well-documented back and forth that was memorialized on Facebook messenger, the trooper agreed to provide sensitive information to the alleged dealer for $1,800 cash.  The cash was marked and then placed behind a Hagerstown motel dumpster by undercover FBI agents.  The FBI continued to monitor the location of the marked cash, and appeared to witness the trooper picking up the money.  There was nothing in the affidavit that stated they specifically identified the trooper as the one who picked up the money, but they did ping his cellphone as being at the location of the dumpster at the time of the pickup.  The trooper and the drug dealer then had a conversation again on Facebook that confirmed he received the money.  Additionally, the drug dealer requested that the trooper run one of his alleged friends through NCIC to see if there was an outstanding warrant, which the trooper agreed to do.  This was probably another attempt to induce the trooper into more unlawful behavior, as misuse of law enforcement databases can be prosecuted.

The affidavit seems quite comprehensive, and the Blog will continue to follow the case as it is set for a probable plea and then sentencing down the road.  Based on the information in the affidavit, there is a high likelihood the government will be asking for a significant term of incarceration, but there may be ways to attack the evidence with a defense lawyer willing to look outside of the box.  If you or a loved one has been charged with a crime, contact Maryland criminal defense lawyer Benjamin Herbst for a free consultation.  Benjamin specializes in bribery, misconduct in office and drug distribution cases in both state and federal court, and he is available 7 days a week for a free consultation.  Benjamin handles cases in Frederick and Washington Counties, as well as the Baltimore D.C. Metro area and the Eastern Shore.

Maryland state trooper based in Hagerstown accused of trying to sell inside information about drug operations, dcnewsnow.com.