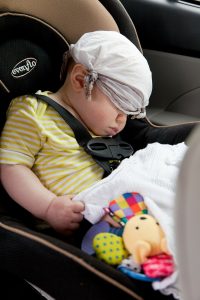 Last week Baltimore County Police responded to a shopping center to investigate a call regarding unattended children in a car.  Upon arriving at the Randallstown strip mall police were able to locate a black Honda Accord with the hazard lights on, and an infant and a toddler in the back seat with no adult in sight.  After checking on the welfare of the children and determining that there were no immediate health concerns, officers then set out to locate the owner of the vehicle to determine who was supposed to be caring for the children.  An initial search of all the nearby shops produced negative results, so police were forced to break one of the car windows in order to reach the children.  Officers apparently tried to instruct the 3-year old to open the car door before they made the decision to break the window.  EMTs were called to the scene to check on the children while police continued to search for the owner of the car.  After again searching all nearby businesses, police noticed a nail salon with the shades drawn, which made it impossible to see if there was anyone inside.  They knocked on the front door and it turned out there were multiple adults inside, including the owner of the Honda where the children were found.  As is sometimes the case with a routine call to service, police found a lot more than they were looking for.

It turned out that the nail salon had been operating illegally in violation of the Maryland governor’s executive order.  All beauty salons in Maryland remained closed until last Friday evening throughout the state, but Baltimore County and other counties such as Howard, Montgomery and Prince George’s County have delaying reopening. Though rather than cite the business for violating section 14-3A-08 of the Maryland Public Safety Code (a criminal misdemeanor punishable by up to a year in jail), police turned their attention to the owner of the Honda who put two children in danger.  Police ended up charging the woman with two counts of confining an unattended child under section 5-801 of the family law article.  This offense carries the possibility of up to 30 days in jail and a $500 fine upon conviction.  This means the 22-year old Baltimore City woman faces up to 60 days in jail when she appears before a District Court Judge in Catonsville for her August trial date.  It does not look like the young woman has any adult prior criminal record in Maryland, so she may be afforded the benefit of probation before judgment and avoid jail time.  On the other hand, the judge will not necessarily be sympathetic to a person who left children unattended to get a manicure during a statewide stay at home order.  Had the woman been shopping for food or other essential items, maybe she could have some reasonable mitigation arguments.  It is understandable that parents would not want to potentially expose their children to the virus, but still, leaving them in the car unattended is not a safer option.

Maryland law prohibits an adult from leaving a child under the age of 8 unattended in a motor vehicle, home or other enclosure.  The law requires that the state prove the adult was charged with the care of the child or children, and that the motor vehicle, home or enclosure be out of site from the adult.  It is a defense if another child 13 years of age or older is with the younger child, but the older child must be considered reliable.  A defendant may be able to argue that child was never out of sight, but this factual affirmative defense must be argued at trial.  It may be a bit optimistic to assume a district court judge would apply the proof beyond a reasonable doubt standard when considering this defense.  Leaving a child unattended is actual a fairly common offense, and many times the defendant was simply running a quick errand.  In this incident, reports alleged the children had been left in the car for up to an hour, which further adds to the aggravating nature of the defendant’s case.

The Blog will follow this case and other newsworthy arrests as the state slowly ends the quarantine.  Benjamin Herbst is a Maryland criminal defense lawyer who represents defendants charged with child abuse, leaving a child unattended and all other criminal offenses including animal cruelty.  During the summer months criminal animal cruelty charges are common for leaving dogs and other pets in the car, even for a brief amount of time.  Benjamin has successfully handled numerous child abuse and animal cruelty cases in Maryland, and he practices in all state and federal jurisdictions including Baltimore County, Howard County, Montgomery County and the entire Eastern Shore.  He is available for a free consultation anytime at 410-207-2598.