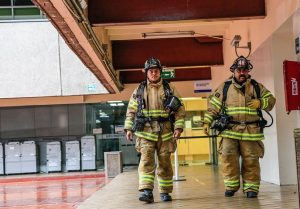 A federal jury recently convicted a Baltimore business owner of multiple felonies for setting fire to his commercial property with the intent to fraudulently reap insurance benefits. The trial took a whopping seven weeks to complete, and now the defendant faces a minimum sentence of 15 years in federal prison. According to evidence presented by the government at trial, back in July of 2015 the business owner began to devise a plan to illegally recoup millions of dollars his company had been losing in the previous few years. The government established a motive by presenting financial records that showed the business lost about $2 million in 2014 and was on pace to lose approximately $3 million in 2015. The government also presented evidence that the defendant defaulted on numerous loans and the company’s debt exceeded total assets by $900,000.

On July 28 of 2015 the government showed that the defendant himself used adhesive tape to defeat security measures at his commercial property so that co-conspirators could enter the building. Just after midnight another person entered the building and disarmed the alarm system by entering the four-digit code, and one hour later a bystander called 911 and reported smoke emanating form the building. The Baltimore City Fire Department responded to the scene but only after fire destroyed an office on the shop floor of the building and damaged the ceiling. On the same calendar day firefighters extinguished the blaze the business owner contacted a public adjusting company to notify them about the fire and request their help with filing an insurance claim. Days after that, the adjusters acting on behalf of the defendant’s company submitted claims for over $20 million and were awarded just over $15 million once all the dust settled.

Law enforcement including the ATF, Baltimore Police and the Maryland State Fire Marshal were never convinced the blaze was caused by an accident or equipment malfunction. They continued to investigate the fire as the insurance company was paying out millions to the business owner, and investigators never took their eyes off the money. It came out in trial that half of the $15 million was used for building restoration and new equipment purchases, but $600,000 was transferred to the defendant’s wife, $98,000 was used to purchase a new Mercedes, $52,000 was used to buy a BMW, $25,000 for a Harley and $35,000 was spent on new jewelry. Although the defendant’s questionable purchases were not direct evidence of his criminal involvement, the government undoubtedly used them to bolster the argument that the defendant’s intentions were never pure. These purchases combined with evidence of the defendant’s presence on the scene and his immediate consultation with insurance adjusters laid the foundation for a case that the defense was unable to crack. A jury at the Baltimore federal courthouse found the business owner guilty of malicious destruction of property by fire, the use of fire to commit a federal felony and two counts of wire fraud. The malicious destruction count carries a five-year mandatory sentence and the use of fire in a felony count carries a consecutive 10-year mandatory sentence. This means that the defendant will serve at least 15 years in prison when he is sentenced at a future hearing in January.

The Blog will continue to follow this case and any other cases involving arson, malicious destruction of property and fraud. If you have been charged or are being investigated for any type of criminal charge contact Maryland arson attorney Benjamin Herbst anytime for a free consultation. Benjamin has taken on the Maryland State Fire Marshal at trial and understands the complex nature of arson cases. Officers working for the fire marshal are not fire science experts and can easily let their law enforcement ties impact their objectivity during an arson investigation. Arson, malicious burning, and burning with intent to defraud cases are serious and must be handled by an experienced criminal defense lawyer.

Baltimore Business Owner Convicted After Trial on Federal Charges for Conspiring to Burn Down His Business in Order to Obtain Insurance Proceeds, justice.gov.