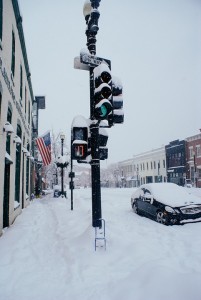 Although crime and calls to service were down throughout Maryland during the historic snowstorm, police and firefighters in Baltimore City were still well prepared to respond if called upon during the blizzard. The National Guard supplied both agencies with military style Humvees, and as it turned out they were put to good use. The city fire department was called to assist with a deadly residential blaze, and was aided by a snowplow in arriving on scene. In addition to patrolling the snow packed streets in marked and unmarked SUVs and the occasional Humvee, the police department was also forced to respond to a few crime scenes. During the early morning hours last Saturday, right in the heart of the record-breaking storm, there were multiple break ins including five reported pharmacy burglaries in the Baltimore area. Police made one arrest in a food store burglary, as officers allegedly observed two suspects climbing out of a store window through the blinding snow while on patrol at 3:30 a.m. One of the suspects vanished into the whiteout, but the other was arrested and charged. Unfortunately for the local business owners there were some who saw the epic blizzard conditions as an opportunity to carry out a quick score, which would theoretically be met with less resistance. Police currently have not made arrests in the pharmacy burglaries, and it is unknown whether they have any suspects at this point.

Pharmacy burglaries have become increasingly common around the state, and especially in the Baltimore area. The pharmacies are not targeted for their cash, as it is rarely stored on the premises. Many transactions are paid with credit card or billed directly to the insurance companies, which is the reason why we rarely see a pharmacy being help up in a robbery. Rather, burglars target pharmacies for their valuable inventory. The pills kept in even the smallest independent pharmacies often have aggregate values exceeding $250,000. And while there is little street value for much of the inventory, the narcotics and anti anxiety medications such as Xanax can sell for thousands on the street. The chain pharmacies such as CVS and Walgreens are more secure, and the pharmacy is typically located in the back of a larger storefront. Some are open 24 hours and have security on site. But many of the smaller, independent pharmacies are not protected in the same manner. These shops are susceptible to break ins, and can have their narcotics targeted even if they are placed in safes or locked cabinets during the night. The drugs can be hard to identify though, and unless it’s an inside job the burglar will typically need extra the time to sort through the inventory. This is probably why the snowstorm produced five pharmacy burglaries in just one night, as the perpetrators assumed the weather would give them the necessary time cushion to locate their plunder. We will follow these snowstorm burglaries and may post a follow up article if the cops happen to make an arrest.

Benjamin Herbst is a Maryland burglary defense attorney who handles cases in all counties and in Baltimore City. Contact The Herbst Firm at 410-207-2598 for a free consultation about your case.