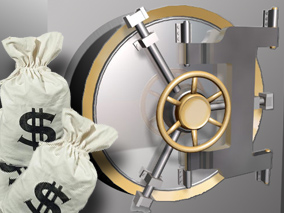 Bank robbery one of the oldest and most glamorized crimes in America. It’s the storyline behind countless novels, Hollywood dramas, and folklore heroes such as Billy the Kid, and Bonnie and Clyde. But now bank robbery is quickly becoming one of the more common violent crimes in Maryland, and those who have noticed more of these stories appearing in the local news are on to something. According to the FBI there were 86 total bank robberies statewide in 2012, and as of last month there were already 98 in 2013. The majority of these heists are actually successful, but law enforcement eventually catches up to the offenders, especially those who hit the same bank multiple times. And if you think it’s rare for a seasoned thief to rob the same bank over and over, think again. It has been a widely used strategy by many thieves to choose a vulnerable establishment and strike multiple times. These vulnerable banks are typically in more rural areas, where crime rates are low and so is the security. In addition, the culprits are often residents of the areas where these banks are located, and if they aren’t residents they are highly familiar with the surroundings. For an example see the case of the former Anne Arundel County schoolteacher who was arrested last month for three Glen Burnie robberies, two of which were at the same bank.

Maryland has moderately harsh laws when it comes to robbery and armed robbery. The maximum penalty for this offense is 20 years upon conviction, but we have seen numerous cases where first time offenders walk away with very little jail time. There is no minimum mandatory jail sentence for the crime of armed robbery, but if the crime was committed with the use of a handgun, the state may, and often will, charge the defendant with a violation of the public safety code statute for use of a handgun during the commission of a crime. This offense carries a minimum jail sentence of 5 years for each count without parole, and no part of the 5 years may be suspended. In addition, if there are multiple counts that result in convictions they must be run consecutively and non concurrently with one another. In realty though, the majority of bank robberies are committed without handguns, or any other weapons for that matter. About 75 percent of all bank robberies take place without weapons. We never see these types of heists in the movies, and in fact when it comes to popular Hollywood robbery flicks such as Heat, Point Break, and The Town the bigger the guns the better. But as state and federal law enforcement would all agree, the threat of force is usually enough to convince a bank teller or even a branch manager to hand over the cash. The money is almost always insured, and no rational employee is willing to risk his or her life to protect someone else’s insured savings account. It will be interesting to see if the legislature does anything to address the increase in bank robberies, but raising the maximum punishment, or instituting harsher minimum mandatories will not likely deter this crime. The risk is there regardless, but the reward will continue to be high. If the issue does make the agenda in Annapolis we will be sure to post a follow up article though.

Benjamin Herbst is a robbery attorney in Maryland who handles all types of theft and weapons charges. Contact Benjamin at The Herbst Firm for a free consultation about your case.