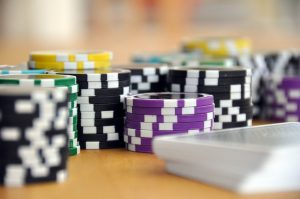 As it became more likely that medical marijuana would soon be legal in Maryland, lawmakers simultaneously realized they needed to modify the criminal laws regarding marijuana possession. Amongst other reasons, it just didn’t make sense to subject a person to criminal prosecution and possible jail time for possessing a substance that was about to become legally available. We recently published an article about the possibility of sports gambling becoming legal as early as this year, and following the path of marijuana, lawmakers in Annapolis are already proposing to alter the criminal laws regarding gambling.

The Maryland gambling laws are strange to say the least, and it doesn’t seem like they have been given much attention over the years. Gambling is not a common crime because save for some large scale book making operations or home casinos the police seem to have better things to do with their time than bust March Madness pools and small time poker games. Plus most people including police officers, prosecutors and judges, have taken part in some form of social gambling in their lives. Still, it is not out of the question for an unlucky gambler to be made an example of just to remind the rest of us that until it’s legal it’s illegal.

The few unlucky defendants that are prosecuted under Maryland state gambling laws are usually surprised to learn that all forms of gambling are grouped under one law. Section 12-102 of the criminal code makes it illegal to bet, wager and gamble. This same section also makes it illegal for a person to sell a book (take bets), run sports pools and keep an underground business where gambling takes place. Logic would dictate that those who are running underground casinos and taking bets would face harsher penalties than the gamblers themselves (similar to drug use/possession vs. drug distribution) but this is not the case. All forms of gambling in Maryland are punishable by the same 1-year maximum penalty, and have a completely harsh and archaic 6-month mandatory jail sentence. Yes, you read that correctly- gambling convictions carry mandatory jail time, which is six times greater than the mandatory jail time for wear, transport or carry of a firearm under 4-203.

Just because a person is charged with gambling does not mean they are going to jail for six months. Similar to the wear, transport carry of a firearm law, there is no provision that prohibits the judge from granting probation before judgment (PBJ), so even if a defendant is found guilty of gambling he or she may not serve a day in jail. Plus if the State’s Attorney’s Office does not notify the defendant of its intention to seek the mandatory jail sentence then the judge will not be permitted to impose it. There are ways around the mandatory jail time, but lawmakers that have reviewed this statute must be in agreement that it’s time for a change.

There are currently bills in both the House and Senate that seek to modify these outdated gambling laws to be more inline with the current climate. If passed, the new law would make betting, wagering and gambling a civil offense punishable by a fine of either $500 or $1,000 depending on how much money was being gambled. Running gambling operations and taking bets would still be a crime, but the mandatory jail sentence would be ditched, and the maximum penalty would decrease from 1 year in jail to 6 months in jail. The fine would actually be raised from $1,000 to $5,000, which makes sense in the grand scheme of things. Whether these bills pass in this particular form remains to be seen, but the criminal gambling law is overdue for updating and this year it’s getting the attention required to make theses changes.

The Blog will continue to follow the progress of the gambling bills over the next couple of months, and will post a follow up article once there is some news to report. Until then feel free to call attorney Benjamin Herbst anytime for a free consultation about criminal matters including gambling, firearm possession and drug distribution. Benjamin handles criminal offenses in areas of Maryland, and is licensed to practice in state and federal court. He is available seven days a week at 410-207-2598 or via email at benjamin@mdtriallawyer.com.