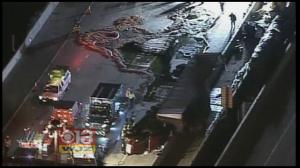 Maryland Police have charged a truck driver with DUI after the driver crashed his tractor trailer on interstate 95 in Baltimore. The apparent drunk driving accident occurred on February 15, on an overpass above interstate 895. Investigators do not know the exact cause of the crash, but the driver likely lost control causing the truck to turn over in the left lane of 95, just north of the Baltimore harbor tunnel. The allegedly intoxicated truck driver was carrying thousands of gallons of a water based chemical additive used in making concrete. Maryland police have yet to release the blood alcohol content of the accused driver, nor did the police divulge whether the driver submitted to a breath or blood alcohol test.

The chemical spilled from the truck was deemed on the scene to not be toxic, although gallons of diesel fuel were also spilled in the crash. According to Maryland police, the crash resulted in the temporary closure of both interstates, leading to major delays for drivers passing through one of Baltimore’s busiest stretches of highway. The closure lasted almost 7 hours while police and environmental crews worked diligently to clean up the spill and assure the highway was safe to reopen. The chemicals and the diesel fuel reportedly were seen dripping off the overpass and on to cars traveling to and from Baltimore city.

Police were still investigating the accident at the time that the driver was arrested to determine the exact cause of the crash. Other charges were filed against the driver in addition to driving under the influence of alcohol according to the Maryland Transportation Authority Police. The driver was ticketed for negligent driving, failure to obey lane direction, and a federal trucking regulation that prohibits drinking alcohol prior to operating a commercial vehicle.

The driver of the truck, a 46 year old man from New Jersey, was carrying 13 275 gallon containers that were filled with the water based chemical. The chemical and the gallons of spilled diesel fuel were washed from the roadways before they were reopened to traffic. The Maryland Department of Environment gave the all clear after the 7 hour cleanup.

The accident did not result in any injuries to other motorists and the driver did not suffer any serious injuries. Police spokesmen acknowledged that the accident could have been much worse if one of the 275 gallon barrels had fallen directly on a traveling car. Police also stated that the chemical could be washed off cars without causing damage, but motorists were warned to clean off their cars before the chemical dried. Once dry, the chemical apparently could stain and damage vehicles much like paint.

In addition to facing criminal charges, the accident may also have civil lawsuit ramifications for the driver and his trucking company. Motorists who’s vehicles have been damaged by the spill may have to sue the trucking company in order to recover the cost of the damages. The motorists or their insurance companies may also choose to sue the driver directly if the trucking company claims that the driver was not acting within the scope of his employment when he decided to drink alcohol and drive. As per usual circumstances the criminal case will likely be disposed before any civil lawsuits are filed.