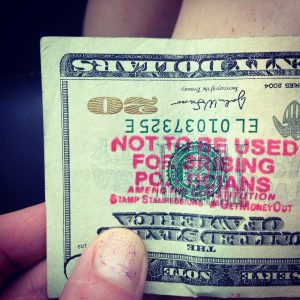 The 2017 Maryland legislative session began this week, and one former delegate probably wishes he took part in the opening day festivities. But instead of shaking hands and schmoozing in Annapolis, a former lawmaker from Prince George’s County spent the first part of his New Year inside a Greenbelt courtroom. This week federal prosecutors announced a recently unsealed guilty plea by a former state and local politician who served 10 years as a PG county councilman before being elected to his most recent position as a state delegate in 2014. His stint as a state lawmaker didn’t last long after he unexpectedly resigned just one year after taking office, and now there is a good explanation for the sudden resignation. It turns out that the feds had been investigating the 42-year old Hyattsville man for a few years, and their investigation culminated in the recent guilty plea to conspiracy and bribery. Federal prosecutors revealed that the man had accepted an estimated $40,000 in return for political favors, most of which had to do with his power over the allocation of public funds earmarked for his district. The illegal activity was not confined to one or even a couple transactions, but rather a course of conduct that was anything but isolated. The multi year public corruption probe that uncovered the former delegate’s misdoings also implicated two members of the county’s liquor board and two local businessmen. Undercover FBI agents made numerous deals with the politicians that included cash payments for the promise of favorable treatment.

Each of the dirty politicians and their private citizen cohorts are being prosecuted federally by the United States Attorney’s Office for the District of Maryland. While the Blog has recently published a few articles about this office pursuing relatively small time gun and drug cases, public corruption and other white collar crimes are the U.S. Attorney’s bread and butter. State law enforcement and prosecution offices simply do not have the resources and perhaps the patience to execute multiyear public corruption investigations. On top of that it may be near impossible for local law enforcement agencies to keep these kinds of complex investigations under wraps, especially when they involve politicians holding office in their own jurisdictions. After all, state’s attorneys and even police chiefs are politicians too. But these cases are right in the FBI’s wheelhouse, and the federal prosecutors who eventually take over their cases have a great deal of pride in exposing crooked state and local politicians. We only wish the two could collaborate with as much success against federal politicians, who are rarely exposed.

The Blog will continue to follow this public corruption case and other similar cases that develop in the future. It seems as if this particular defendant cooperated with federal authorities and as a result will likely receive a more lenient sentence. Authorities have not stated exactly how the defendant cooperated or whether his cooperation directly led to the charging of the liquor board members, but we will post if this information comes to light. The former delegate faces up to 15 years in prison when he goes before a federal judge at his April sentencing hearing, and he has already agreed to pay $340,000 in criminal restitution.

Benjamin Herbst is a Maryland federal criminal defense lawyer that handles white collar crimes such as bribery, conspiracy and misconduct in office. Contact Benjamin for a free consultation anytime at 410-297-2598.