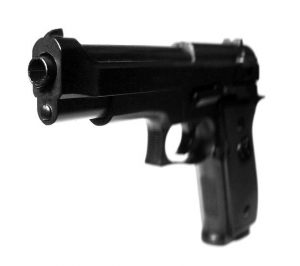 Over the last couple of years law enforcement has seen a dramatic uptick in the presence of build-at-home firearms commonly known as ghost guns.  Ghost guns are typically ordered online and delivered to a person in a kit with several unfinished parts.  These parts require some degree of machining, with tools such as a drill press, in order to be transformed into a fully functional firearm.  The fact that the gun parts come unfinished is what enables manufacturers to be able to sell them without abiding by strict state and federal regulations that traditionally apply to gun manufacturers.  In addition, the customers who buy and build the gun parts can also skirt certain state and federal requirements pertaining to registration and identification.  For example, under Maryland law it is a crime to possess a firearm that lacks or has an obliterated serial number.  But ghost guns are not required to be registered or labeled with a serial number.  The problem for law enforcement is two fold; ghost guns are easier to obtain for those who traditionally would be prohibited from purchasing a firearm, and the guns that are seized are impossible to trace back to other potential crimes.  Law enforcement’s concerns over ghost guns has recently become a priority for Maryland lawmakers in Annapolis, and we will likely see tighter regulations of these weapons beginning in 2022.

Under Senate Bill 624 lawmakers are seeking to require ghost gun manufacturers and owners to adhere to similar requirements as regular firearms dealers and manufacturers.  In Maryland this would require buyers to produce a valid Handgun Qualification License in order to lawfully purchase a ghost gun.  Additionally, once the bill becomes law current owners of ghost guns would have to take measures to stamp their weapon with a serial number, and identify the make and model of the weapon.  The build-at-home guns would also have to be labeled with the lawful owner’s full legal name.  Anyone in possession of an unmarked ghost gun after the bill becomes a law could face prosecution if they do not follow the labeling requirements, but a first offense would not be considered a criminal violation.  Rather, a first would be classified as a civil violation punishable by a minimum $1,000 fine upon conviction.  It is unclear whether there would be a mandatory court appearance for this civil violation, or if the defendant could prepay.  Either way, it would behoove any defendant to show up to court and fight the case or request a probation before judgment to avoid the mandatory fine and a finding of guilt.

Under the current bill a second offense for possession of an unlabeled ghost gun would be prosecuted in criminal court and punishable by up to 2 years in prison and a $5,000 fine.  The judge would be permitted to make certain findings that could end up in a dismissal if the violation is not deemed serious and the defendant has not been previously convicted.  There will likely be numerous modifications to the bill before it becomes law, but chances are that some sort of ghost gun legislation will pass this year.  Baltimore Police recovered 126 ghost guns in 2020 compared to 29 in 2019, and the numbers are bound to continue to increase absent government intervention.

If you have been charged with any type of gun crime contact Maryland weapon lawyers at the Herbst Firm at 410-207-2598.  The Firm specializes in gun charges such as illegal possession of a regulated firearm and possession of a firearm by a convicted felon, and have also successfully represented dozens of clients charged with wear, transport or carry of a firearm within Maryland and on federal property.  We have also helped numerous out of state gun offenders from places such as Virginia, North Carolina and Florida, who unintentionally break Maryland’s harsh firearms laws.  Anyone who has been charged in Florida for gun crimes such as carrying a concealed firearm and possession by a convicted felon can also call experienced Florida gun lawyer Benjamin Herbst at 954-543-0305.