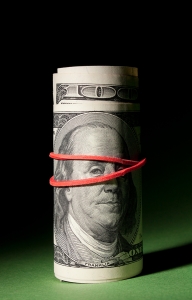 Annapolis police have arrested a 19 year old Maryland man in one of the largest drug busts in Anne Arundel County this year. Police received tips from community sources, as well as their own investigations in order to secure a search warrant that ultimately led to the seizure of nearly $30,000 worth of heroin, stacks of cash, and marijuana. Police also seized two handguns from the Maryland man’s house. Closer examination of the guns back at the Annapolis police department revealed that the firearms, a 9mm Beretta and a Smith and Wesson, were in fact stolen. Police did not reveal how much marijuana was seized from the Maryland residence, but closer inspection of the heroin revealed 140 grams of high grade heroin packaged for sale. Annapolis police are still investigating possible sources of the heroin. At the current time, police have not arrested a supplier, but more arrests stemming from this bust could be imminent. The Maryland man was arrested on 5 separate CDS drug counts including narcotics possession, possession of drugs with intent to distribute, and possession of drug paraphernalia. Bail was set at $40,000, which was posted soon after the arrest.

In the last few years, there has been a decline in the overall crime levels in Maryland’s capital city of Annapolis, especially in the rate of violent crimes such as assault and robbery. But Annapolis cops and other police forces in Maryland such as the Baltimore police department are still seeing evidence that drug use and drug dealing is not going through the same decline. Police use their own arrest data, as well as available date from external sources such as hospital admissions for drug overdoses, to conclude as the Annapolis police department’s spokesman did after this drug bust was made public “that the war on drugs is far from over”.

Statement like this from police jurisdictions around Maryland must remind us that police have a vested interest in publicizing an increased need to continue to fight the war on drugs. Police departments want Maryland citizens to believe that their tactics to eliminate crimes such as drug dealing and drug possession are working, but not working to the extent that the problem is going away. A drug bust such as this $30,000 heroin seizure will likely do nothing to curb the availability of heroin in the Annapolis area. Users will simply find another dealer, and small time dealers will simply find another supplier. But police will continue to publicize these busts to justify their financial needs despite the decreased rate of violent crime. Over the years we have read hundreds of stories about high profile Maryland drug busts, and seen hundreds of pictures of Maryland police officers standing besides seized drugs, but drug use and drug dealing crimes are going nowhere but up in Maryland. Police should continue to focus a large majority of resources on violent crimes, and crimes with readily identifiable victims, such as identity theft and fraud. These programs are severely under funded and lack resources because they do not provide police with the shock value media stories that major drug busts provide.

Benjamin Herbst is a Maryland drug lawyer, who specializes in heroin possession and marijuana distribution criminal cases. If you or someone you know has been arrested for any drug crime in Maryland including Annapolis or Baltimore, contact Anne Arundel County drug lawyer, Benjamin Herbst for a free consultation.