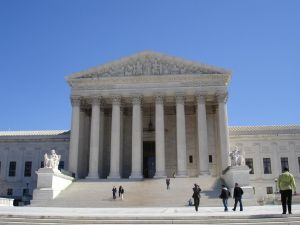 The United States Supreme Court will temporarily allow Maryland law enforcement agencies to resume their post arrest DNA testing policies according to an order signed by chief justice John Roberts. The DNA testing policies allow all Maryland law enforcement agencies to take DNA samples of suspects arrested for violent crimes such as robbery, assault, rape, and homicide. The law also allows police to take DNA from a suspect that is arrested for burglary. Although burglary is not a violent crime, it is a crime that is often only solved when forensic evidence such as DNA or latent fingerprints is recovered from the crime scene. Maryland police agencies are not allowed to take DNA samples upon arrest of suspects that are incarcerated for common non-violent crimes such as DUI, possession of marijuana, and drug distribution.

Earlier this year, the Maryland DNA sampling law was challenged in the Maryland Court of Appeals, and the Court ruled that the DNA collection policy was unconstitutional under the 4th Amendment of the United States Constitution. The 4th Amendment protects citizens against unlawful government search and seizures, and it has been argued by the ACLU and the Public Defender’s Office that taking DNA samples upon arrest is an unlawful seizure. Most states only take DNA samples from defendants after a criminal conviction, or after a judge issues a warrant specifically allowing DNA collection. The ACLU also argued that Maryland’s DNA collection policy violates each citizen’s right to privacy. The Maryland high court agreed with the ACLU back in April, and reversed a 2009 rape conviction. The rape defendant was arrested on an unrelated assault charge, and pursuant to the Maryland DNA testing policy; his DNA was sampled and entered into a database. The database matched the DNA taken from the assault arrest with DNA that was recovered at the scene of an unsolved Maryland rape case, and thus an arrest warrant was issued for the rape defendant.

The order handed down by Chief Justice Roberts has left Maryland law enforcement agencies in flux because the Maryland high court ruling has not yet been overturned. The order appears to be a temporary win for law enforcement, because the Supreme Court is still going to allow the ACLU and the Public Defender to respond to the order. There is no word whether the Supreme Court will actually entertain oral argument in the case, or if the Court will simply enter a final order, but chances are that the latter will occur. About 1 percent of all cases sent to the nations highest court are actually heard by the 9 justices. The is also no word as of yet to whether the Maryland State Police will immediately resume DNA sampling, or whether it will wait for a final order. Baltimore County police will most likely wait on a final order, after he went on record saying it might make sense to wait a week. In the meantime, Baltimore County will continue to prosecute cases that are built upon the post arrest DNA sampling policy. Baltimore Criminal Defense Lawyer Blog will continue to follow this evolving legal battle, and will post a follow up article in the coming days.