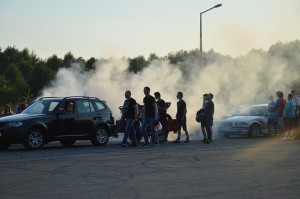 The 2016 Maryland legislative session is officially heating up, and numerous new criminal law bills are being discussed in the House and the Senate each day. There are a handful of criminal law bills that are slowly advancing, while many others have already received unfavorable reports by the Judiciary and have been withdrawn. But one bill that seems destined for the governor’s desk is a proposal that smoking marijuana in a car officially be declared illegal. Regular readers will remember the ongoing saga where the governor vetoed a necessary marijuana paraphernalia decriminalization bill because is contained no provision allowing officers to stop a car after observing the occupants smoking pot. Giving officers this power may have been totally reasonable, but it had absolutely nothing to do curing the immense confusion in the state’s marijuana policy by decriminalizing paraphernalia. The governor was simply trying to flex is legislative muscle, though luckily the lawmakers in Annapolis overrode the veto. Pot paraphernalia is no longer a crime and now the natural legislative process has brought us a bill that would achieve what the governor stubbornly tried to do through veto power last summer. At the risk of being too harsh on our governor, we’ll give him the benefit of the doubt and suggest that the veto may merely have been a tool to motivate and remind the legislature to make toking in the car a no no.

House Bill 183, which is has moved to the Senate after unanimous approval in the House, will add a provision to the transportation article that already addresses drinking alcohol in a car. This law currently makes it illegal to consume any alcoholic beverage in a car or truck on a public highway regardless of whether the car is parked or moving. If the new bill becomes law it will modify the statute to include smoking or consuming marijuana in a parked or moving automobile on a public highway. Violation of this provision is not currently a criminal offense, but rather a traffic citation punishable by a $500 fine. The proposed bill keeps it that way, as its main utility is giving officers the legal authority to conduct a traffic stop based solely on observing marijuana use. This is exactly what the governor and some elected prosecutors publicly wanted last summer, but prosing new legislation and allowing the process to play out is the right way to achieve it. The Bill will most likely pass unmodified, although there could be some minor changes after the Senate is through with it. And when it hits the governor’s desk you can bet it will be one of the first he signs. Look for smoking pot in a car to be illegal and punishable by a $500 fine to be illegal starting in October of 2016.

We will continue to follow this bill and other criminal law bills at they progress through the legislature. One bill that is of particular interest is House Bill 307, which lowers the maximum penalty for possession of drugs such as cocaine, heroin, and narcotic painkillers from 4 years to 1 year. This is a proposal that is a long time coming considering the changes in marijuana possession policy. A 4-year maximum sentence for simple possession is unnecessarily high, as 1 year in jail is more than enough to deter and punish drug possession.

Benjamin Herbst is a Maryland criminal and traffic lawyer who handles all cases including DUI and drug possession.  Contact Benjamin for a free consultation anytime at 410-207-2598.