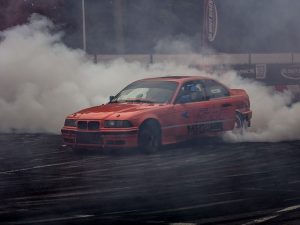 Police officers from all over the state are being deployed to Ocean City this weekend to keep the peace at one of the largest pop-up car rallys in the region.  Each year at the end of September car owners and enthusiasts flock to Ocean City to socialize, drive and watch hundreds of customized rally cars cruise down Coastal Highway.  Unfortunately, the cruising often escalates into more aggressive driving activity and the town government and law enforcement have had enough.  The rally, also called the H2Oi, is an unofficial event that is not sanctioned by the city or the county, but nonetheless the government is forced to deal with the “chaos” that it brings.  In 2019 the event was too much for the Ocean City government to stomach, and the mayor swore the “chaos” would never happen again.  Rather than sit back and scramble to enforce the state and local laws as if it were a normal party weekend, the government made a conscious effort to come out swinging for the 2020 event that runs until this Sunday night.

The town is planning to deploy hundreds of extra police officers  from various jurisdictions to supplement the OCPD including the Worcester County Sheriff’s Office, the Maryland State Police, the Maryland Natural Resources Police and the Wicomico and Queen Anne’s County Sheriff’s Offices.  These officers will now be armed with new criminal enforcement tools in the form of legislation that passed the General Assembly this year.  The legislation allows local governments to establish Special Event Zones, which include events that are sanctioned by the government or unsanctioned but expected to attract more than 1,000 people.  The H2Oi falls under the latter category, as it is not officially sanctioned by Ocean City or Worcester County.  Once the government has defined a Special Event Zone, it can give law enforcement the power to reduce speed limits, increase fines and even arrest individuals for certain traffic offenses that are normally classified as minor and only subject to fines and points.  Speeding in a Special Event Zone becomes punishable by a fine of up to $1,000 and participating in Exhibition Driving becomes punishable by up to 60 days in jail and/or a $1,000 fine.  This week the hundreds of extra police officers will now have the authority to arrest a person for Exhibition Driving.

Exhibition Driving is defined under the new Maryland law as excessive or abrupt deceleration or acceleration, skidding, squealing, burning or smoking of the tires of a motor vehicle, swerving or swaying of a motor vehicle from side to side while skidding, producing an unreasonably loud, raucous or disturbing noise from a motor vehicle’s engine, grinding the gears of backfiring the engine of a motor vehicle, popping the wheels of a car off the ground and transporting a passenger on the roof or hood of a car.  Anyone who violates these provisions can be arrested and taken before a District Court Commissioner, and then face a mandatory court appearance down the road.  These laws have only been approved for Worcester County, as it certainly appears the legislature is directly targeting the H2Oi without explicitly saying so.

In 2019 police officers responded to 3,000 calls, issued 1,500 citations and arrested 121 individuals at the pop-up car rally.  This year the number of arrests is likely to increase dramatically due to the new legislation.  If you have been arrested or cited with an Exhibition Driving violation do not wait to hire a lawyer until you show up to court.  The Court will likely try to make an example out of anyone who is arrested for violating theses new driving laws, and even first-time offenders could face the potential for jail time and hefty fines.  Benjamin Herbst is a Maryland criminal defense lawyer who specializes in traffic offenses such as reckless driving, DUI, leaving the scene of an accident and fleeing or eluding a law enforcement officer in Ocean City and the entire Eastern Shore.  He represents clients in all Maryland jurisdictions including the Baltimore and D.C. metro areas.  Benjamin is also licensed in Florida, and is available 7 days a week at 410-207-2598 for a free consultation.

Ocean City braces for return of H2Oi after an especially chaotic 2019 event, delmarvanow.com.