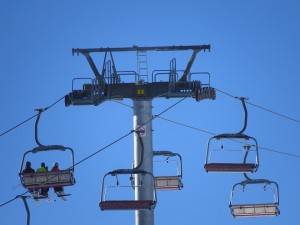 While millions cursed the record breaking January blizzard for canceling travel plans, court dates and business meetings, the local ski resorts celebrated every second of it. What started out as a miserable ski season for Maryland and Pennsylvania resorts quickly turned into a moneymaking windfall thanks to the infamous Jonas. But it wasn’t all happy times up in the mountains as two Harford County teens were recently charged with theft at Ski Roundtop. Local police alleged that the two Bel Air boys took rental snowboards from the mountain shop without paying and then rode the ski lifts sans lift tickets. After mountain employees, also known as lifties, caught on to the scam police were notified and reported to the scene. In the past this type of violation would usually result in being kicked off the mountain and possibly banned for the season, but the cops were called to send a message that skiing without a pass is theft, and will be treated as such.

This recent theft is certainly not the crime of the century, or even the crime of the day, but it does call attention to some legal issues that are important to understand. It is clear that nothing was actually stolen in the traditional, non-legal sense of the word, as the boys did not remove the snowboards from the resort and likely never intended to do so. If taking the boards was their intention, they certainly would not have stayed on scene to try them out. Rather, the Bel Air teens were charged under the principals of unlawful control of property and theft of services. This case took place in Pennsylvania, but the Maryland theft laws are quite similar in that they criminalize both theft of property and theft of services under the same statute. Had this incident taken place at Wisp for example, the act of skiing without a lift ticket and using a rental snowboard without paying would have violated section 7-104 of our state’s criminal code. This section makes it a crime to use the property of another without permission, and also to obtain the services of another by deception. Sneaking on to the lift without buying a ticket would qualify as the act of deception, and a theft occurred despite the fact that the ski resort didn’t actually lose anything tangible.

Under Maryland law obtaining services by deception or fraud is treated the exact same way as a theft of another’s property. The maximum penalty depends on the value of the services that were unlawfully obtained. In this particular case the total value of the board rental and the lift ticket came up to $105, which would be a misdemeanor theft with a maximum penalty of 18 months in jail. A charge of illegally obtaining services with a value under $100 carries a maximum penalty of 90 days, while unlawfully obtaining services over $1,000 is a felony that starts with a 10-year maximum punishment. Services often do not have a definite value, so police and the prosecution will typically use whatever evidence they get from the victim of the theft. Unfortunately they tend to round up, but a good lawyer should be able to move the arrow in the other direction when the case goes to court.

Benjamin Herbst is a theft lawyer in Maryland who handles cases in all counties and in Baltimore City. Contact Benjamin for a free consultation about your case anytime at 410-207-2598.