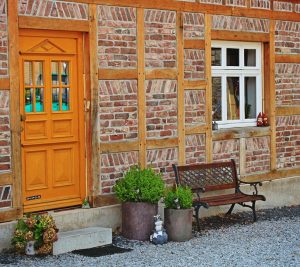 The Baltimore County Police have reported the arrest of two men in connection with a string of package thefts in a single family home development in Pikesville. Residents in the area of Smith Avenue and Greenspring Avenue have been noticing missing packages for the last couple of weeks, but many never suspected wrongdoing. Some residents even took notice of a suspicious vehicle driving slowly through the new construction development, but did not make the connection to missing packages.  Eventually the area residents and the county police caught wind of the ongoing conspiracy and went on high alert, and their vigilance paid off. Two suspicious men in reflective vests were reportedly seen removing packages from the front porches of houses, and then leaving in a dark colored SUV. Information about the dark SUV spread quickly, and when the men returned a neighbor followed them to get a closer look at the license plates. Armed with the license plate information it was only a matter of time before county police found and arrested their suspects.

The two suspects were charged with seven counts of fourth degree burglary and seven counts of theft less than $1,000. The 25-year old defendant was released on a $25,000 bail, while the 47-year old defendant is still being held on a $20,000 bail. Each count of burglary likely matches up with a corresponding theft count to represent one act, so it appears that there were seven individual crimes. Under state law a defendant can be convicted of burglary and theft at the same time for one criminal act. Theft less than $1,000 is a misdemeanor with an 18-month maximum sentence while 4th degree burglary under section 6-205 is a misdemeanor with a 3-year maximum jail sentence. Fourth degree burglary is the catchall burglary charge in Maryland, which means there are wide ranges of factual scenarios that fall under the statute. It includes breaking and entering a house or any type of building, and also entering the property of another with the intent to commit a theft. Unfortunately for the two suspects, property of another includes the yard, garden and porch.

If the facts of the these package thefts turn out as they were reported by police then prosecutors will have little trouble proving the burglary charges. Some of the theft charges may have to be reduced to less than $100, especially considering one alleged victim reported that all that was taken from her was a box of coffee. But with a total of seven different incidents to choose from it seems like these defendants are headed toward a plea, as the state basically has seven shots at a conviction. As with any burglary case though, identity is always the key issue. The best way for a lawyer to defend the case at trial would be to challenge the state’s ability to prove who actually took the packages. There is little chance that any of the alleged victims know the defendants personally, and they were not caught in the act. The state’s case would then come down to in-court identifications plus any circumstantial evidence that police have gathered. The Blog will follow these cases, and may post an article about their resolution in the future.

Benjamin Herbst is a Maryland burglary and theft attorney who handles cases in all counties plus Baltimore City. If you or a loved one has been arrested or is being investigated for any crime call Benjamin today at 410-207-2598.

2 men charged in theft of packages in Pikesville area, wbaltv.com.