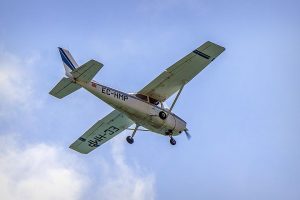 This past Friday planes equipped with high tech surveillance cameras began flying over Baltimore City as part of an experimental effort to solve violent crimes.  The planes will be in the air for up to 6 months, and the footage will be monitored on the ground by officers from the Baltimore Police Department.  City taxpayers are not footing the bill for the planes or the cameras, as a Texas based philanthropic organization has already pledged $3.7 million to conduct the pilot program.  The aerial surveillance system uses wide angle lenses that can allegedly monitor 90% of the city, though the planes will only fly during the daytime and the aerial cameras will be not be able to make out faces or read license plates.  The hope is that the aerial footage can be used to supplement Citywatch street cameras and other technology on the ground.  After a crime is reported an analyst will rewind footage to the location, and follow suspects or vehicles until a higher definition camera on the ground can communicate identifying information to police.

Despite the fact that people and cars will only appear as a pixel that reveals no personal identifying information, the ACLU tried to block the pilot program by filing for a restraining order in the United States District Court.  The ACLU argued that the program is unconstitutional, and has the power to track every private citizen in Baltimore as soon as they walk out their front door.  They also argued that continuous aerial surveillance infringes upon reasonable expectations of privacy regarding movements, that could result in warrantless searches, and compared the program to a police officer following every resident wherever they go.  Law enforcement and the company flying the planes have stated they have no intention of following any citizen unless it is in direct response to the occurrence of an egregious violent crime.  Specific crimes cited by BPD include murder, attempted murder, armed robbery, carjacking and shootings.  A federal judge unsurprisingly denied the request for restraining order, citing that federal courts have previously upheld greater government encroachment in the past.

The Blog will certainly continue to follow this story and will post a follow up article in the future as news develops.  The media, politicians and citizens will be waiting to see how effective the pilot program is at solving crime, but from a criminal law standpoint solving crime does not mean simply making an arrest.  In any case where aerial surveillance was used to capture a suspect there is a high likelihood that the defendant’s criminal defense lawyer will move to suppress the evidence.  As long as the police department follows the protocol and limits the surveillance to its intended purpose these motions likely will be unsuccessful.  It does not seem overly intrusive to have low definition cameras overhead, and there is a much lower expectation to privacy when a person is out in public.  On the other hand, the BPD has proven to be incapable at following rules in the past so there may be some angles for lawyers to explore.  If the program does have documented success there is every reason to believe we’ll start seeing planes fly in other smaller geographical areas with high crime rates such as St. Louis, Detroit, Memphis and the South Side of Chicago.

Benjamin Herbst is a Maryland criminal defense lawyer who represents clients in all charges including robbery, attempted murder, armed robbery, carjacking and assault.  He also specializes in gun crime defense for charges such as possession by a prohibited individual and the use of a firearm in a drug trafficking crime.  Call Benjamin anytime for a free consultation at 410-207-2598.