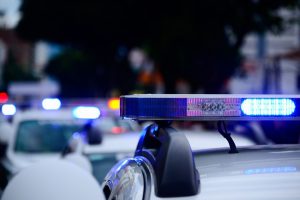 A 24-year old Washington D.C. man was recently sentenced to over 4 years in federal prison followed by 3 years of probation for striking an SUV and killing the driver on the Baltimore-Washington Parkway.  According to the plea agreement the man was involved in a collision with a D.C. Metro police vehicle but rather than stop he fled the scene into Maryland via the parkway.  Despite being pursued by a Metro police vehicle the young man kept fleeing at a high rate of speed even after one of his tires blew out.  He then began to pass slower moving vehicles on the right shoulder and veered over several lanes of traffic at a ramp to Interstate 495.  It was at this point that the D.C. man struck a Honda CR-V that was stopped in a painted safety zone between lanes of travel causing it to spin around and eventually roll over on its side.

The federal government is responsible for maintaining and policing the B-W Parkway, and therefore territorial jurisdiction is satisfied.  Typically, the Maryland-National Capital Park Police is the arresting agency that handles cases on the B-W Parkway and other parkways such as the Clara Barton.  In criminal cases occurring on the parkways in Maryland law enforcement can choose to charge a defendant under federal law or under any applicable Maryland law.  The defendant could have been charged under Title 2 of the Maryland Criminal Code for manslaughter by vehicle or vessel (boats).  State law breaks up manslaughter by vehicle or vessel in two categories, with the most serious being with gross negligence.  This charge is a felony that carries a 15-year maximum penalty, while the lesser form, criminal negligence, is a misdemeanor with a 3-year maximum penalty.

If you or a loved one has been charged with a criminal or traffic offense on the B-W Parkway, the Clara Barton Parkway or any other federally maintained road contact Maryland federal criminal defense lawyer Benjamin Herbst anytime for a free consultation.  Benjamin specializes in federal DUI defense cases and is an experienced lawyer for possession of a firearm on federal property.  He also specializes in criminal manslaughter and vehicular manslaughter defense in all Maryland state courthouses, and has the experience and dedication to achieve the best possible results in these difficult cases.  Contact Benjamin anytime at 410-207-2598 to discuss your case and the possible defenses that may be available to you.

Washington, D.C. Man Sentenced to More Than Four Years in Federal Prison for Involuntary Manslaughter in Connection With a Fatal Crash on the Baltimore-Washington Parkway, justice.gov.