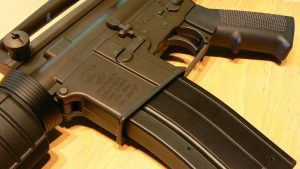 Lawmakers stated in no uncertain terms their desire to make Maryland one of the toughest gun law states in the country when they passed the Firearm Safety Act back in the spring of 2013. The then democratic governor’s signature was a foregone conclusion and as of October of that same year the sale, purchase and transfer of semi-automatic handguns with a magazine capacity greater than 10 rounds became illegal, as did the possession of certain “assault” rifles and pistols. New security requirements were also established for state residents wishing to purchase firearms. While the magazine capacity limitation was frustrating for dealers, potential buyers and manufacturers such as Beretta, which was in essence forced to move dozens of M9 pistol manufacturing jobs out of Maryland, it was the assault rifle ban that caused the most backlash.

Politicians and anti-gun lobby groups hailed the assault rifle ban as a major victory in the fight against gun violence but it also left many outraged that it was neither constitutional nor beneficial. Firearms rights advocacy groups such as the NRA challenged the ban on numerous popular weapons such AR-15, which is a semiautomatic civilian version of the M-16 automatic assault rifle. The state prevailed in round one of litigation after a federal district court judge ruled that Maryland lawmakers did not overstep constitutional boundaries by banning weapons they believed were not built for self defense or recreational purposes, but rather to kill. Round two of litigation went to the NRA and other original plaintiffs. The United States Court of Appeals for the Fourth Circuit remanded the decision back to district court because the judge used an incorrect standard when conducting a balancing test between government intrusion and the state’s interest in protecting its citizens. But not long after this decision came down the state appealed, and the Fourth Circuit agreed to hear the case again. Only this time all judges at the Richmond, Virginia appellate court would be present and involved in the decision rather than a panel of just three judges like in the prior appeal.

In a somewhat lopsided decision, the Fourth Circuit recently ruled 10-4 that the Second Amendment does not protect so called assault rifles from being banned by Maryland law. The opinion labels weapons like the AR-15 as “weapons of war” that have already been excluded from constitutional protection by the Supreme Court in a prior case out of Washington D.C. The appeals court wrote that state lawmakers and not the courts bear the responsibility for the safety of their residents, and should not be prevented from regulating assault weapons. A strong dissenting opinion argued that states should have no say in what type of weapon citizens should be able to keep in their homes for protection as long as that weapon is one commonly possessed by American people for lawful purposes, and the AR-15 is undeniably possessed lawfully by thousands of Americans.

The Blog will continue to follow this case and future firearm legislation in Maryland. While the Supreme Court has thus far declined to accept appeals involving a state assault rifle bans, this could change at any time as new Justices are appointed. Benjamin Herbst is a gun crimes attorney that handles cases such illegal possession of a firearm and unlawful wear transport or carry of a handgun. These laws are listed in both the Maryland criminal code and the public safety code and could carry mandatory minimum jail sentences if not handled properly. Contact Benjamin for a free consultation about your case anytime at 410-207-2598.