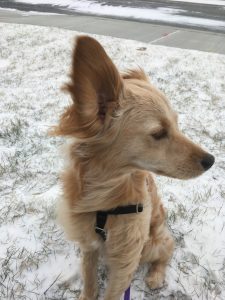 Multiple police departments in Maryland have posted messages on social media warning local residents to take proper care of their pets amidst the current run of frigid cold temperatures. Anne Arundel County Police sent the word out via Facebook post, which focused on dog owners who choose to leave their pup outside unattended in the cold weather. The police department provided specific guidelines during a severe weather animal emergency including maintaining a constant supply of non-frozen drinking water and using a dog house that is equipped to protect against the elements. The houses must have a usable door flap pointed away from prevailing winds, abundant dry bedding and be situated at least 2 inches above the ground (or any snowfall on top of the ground). Police also warned that houses or shelters that are too large to maintain a temperature above 33 degrees are unsafe for dogs, and any shelter may not be suitable if the “feels like” temperature drops below 20 degrees. During the last week and for the next few days a “feels like” temperature of 20 degrees may seem like summer, and thus no dogs should be left unattended outside for the foreseeable future. Those who fail to comply with the Anne Arundel County law during severe weather animal emergencies face civil fines up $1,000, confiscation of the animal and the potential for criminal charges for animal abuse or neglect.

Montgomery County issued a similar message, reminding residents that during weather emergencies pets must not be left outside unattended. The county police department gave a stern warning that leaving animals outside in these conditions may be considered an act of cruelty, and owners could be subject to criminal charges. The Montgomery County code provides a civil fine of up to $500,which police officers could charge in addition to the state statute regarding abuse or neglect of an animal. Under section 10-604 of the Maryland criminal code anyone who deprives an animal of necessary sustenance or inflicts unnecessary pain or suffering upon an animal could be found guilty of a misdemeanor and sentenced to up to 90 days in jail and a $1,000 fine. In addition, a conviction could result in the defendant being prohibited from owning pets in the future and being compelled to participate in psychological counseling at their own expense. If the police deem that the cruelty was intentional they may charge a defendant with aggravated animal cruelty under 10-606, which is a felony with a 3-year maximum prison sentence and a $5,000 fine. As with many criminal cases in Maryland, police officers will typically charge a suspect with the maximum relevant offense even if there is unconvincing evidence that it occurred.

Animal cruelty is a serious charge in Maryland and should be handled with extreme care to prevent penalties including a permanent criminal conviction and even jail time. An attorney could help obtain a dismissal or prevent criminal charges from being filed in the first place. In some cases police officers or animal control will confiscate the pet before making a determination whether to file charges. A lawyer can communicate with these agencies to try to work out an alternative resolution to the filing of criminal charges. Benjamin Herbst is an experienced Maryland animal abuse attorney who handles cases in all jurisdictions. Contact Benjamin today at 410–207-2598 for a free consultation.