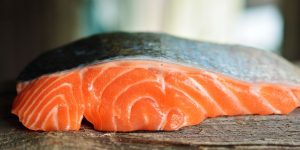 A popular downtown Annapolis restaurant was burglarized last month, and the two suspects have yet to be identified or apprehended.  Unfortunately, dozens of businesses and homes are burglarized each day in Maryland, but this incident was particularly bizarre.  For starters, surveillance video showed the suspects entering the restaurant’s kitchen through an unlocked door while many members of the staff were still busing closing down after a night of business.  Rather than proceed to look for cash, liquor or other common valuable items, the burglars went straight to the walk-in refrigerator an emerged with approximately 40 salmon fillets.  At a cost of $10 per fillet, the total loss for the restaurant was around $400.  While not the heist of the year, this likely ranks as one of the largest fish thefts in Anne Arundel County in a while.

Annapolis Police first responded to the call after midnight following a busy post-quarantine Sunday night.  According to police, the manager was getting ready to head home when he noticed several salmon fillets sitting in the kitchen instead of their normal storage spot in the fridge.  He questioned his fellow employees, but none were able to provide an explanation about the mislaid fillets.  A trip to the office for a review of the security cameras quickly explained the situation, though it was likely not what the employees expected to see.  It is unclear whether the thieves performed a quick in and out job, or took their time to maximize their haul.  In the movies, a bank heist usually goes south when the robbers spend too much time in the vault.  These salmon thieves may have taken notice and limited their time in the walk-in refrigerator.

Had the pair have been caught in the act, or identified and arrested down the road they would have faced multiple criminal charges including second-degree burglary.  Second-degree burglary is defined as breaking and entering a storehouse (business) with the intent to commit a theft, arson or a crime of violence.  Contrary to common belief, breaking and entering does not mean the suspect actually has to break something to gain access to the interior of the building.  Opening an unlocked door and crossing through the doorway is enough of an intentional act to qualify as breaking and entering under Maryland law.  Second-degree burglary is a felony with a maximum penalty of 15 years in prison, though if a firearm was stolen it becomes a 20-year maximum.  Other states such as Florida have similar enhanced penalties when a burglary suspect steals a firearm during the course of the crime.  In Florida this becomes armed burglary, which is actually punishable by life in prison.  The suspects would also have been charged with theft less than $1,500, which is punishable by up to 6 months in jail.  If the suspects did not have lengthy criminal records the state would likely have offered a plea to theft, and kept the offense a misdemeanor.  The case is likely to remain as cold as the salmon left in the fridge, but if anything changes the Blog will be sure to post a follow up article.

Benjamin Herbst is a Maryland and Florida criminal defense lawyer, who specializes in burglary, theft and arson cases.  He has successfully represented hundreds of clients facing charges for almost every type of crime from murder to marijuana possession.  Benjamin offers free consultations and is available anytime at 410-207-2598.