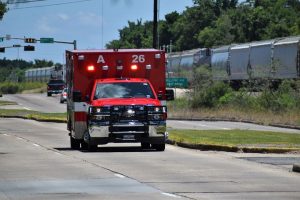 A 23-year old woman was arrested last week after she allegedly stole an ambulance from the West Annapolis Fire Station and then crashed it into a van.  The sole occupant of the van was flown to shock trauma with serious injuries, while the ambulance thief fled the scene of the accident on foot.  As a result of her fleeing the scene the young woman was not arrested until the next day, and is now out of custody after being released on her own recognizance.  She is facing charges for theft over $100,000, rogue and vagabond and motor vehicle theft.  Unlawful taking of a motor vehicle and theft over $100,000 are both district court felonies, and trial has been scheduled in October.  The woman has also been charged with reckless driving, negligent driving and driving without a license.  She may face additional charges for leaving the scene of an accident involving injury.  Reports did not offer an explanation of what prompted the woman to steal the ambulance as fire fighters were training when the vehicle was initially taken.  There is also no indication of what exactly caused the accident, though the woman did receive a citation for running a red light.  All told, this is a pretty bizarre scenario and whichever Anne Arundel County judge hears the case will likely not be too pleased with the defendant.

While the defendant does not appear to have a prior criminal record other than a drug possession case on STET, she may face an uphill battle in the fight to stay out of jail and keep her record free of a criminal conviction.  This is especially true if she ends up being charged with leaving the scene of an injury accident.  Despite being classified as a traffic offense and only carrying a 1-year maximum jail sentence, leaving the scene of an accident with bodily injury is an offense that prosecutors and judges take extremely seriously.  The defendant’s record of committing traffic offenses is lengthy, and she does not appear to have had a valid license recently.  There are numerous prior traffic cases in multiple different jurisdictions including Baltimore City, Prince George’s County and Anne Arundel County.  Ultimately her prior record of traffic convictions may come back to hurt her when her trial date comes around in the Fall.

The Blog will continue to follow this strange case, and may post a follow up article in the near future.  It is hard to think of a reasonable explanation why a person would steal an ambulance.  There may be valuable equipment in emergency vehicles, but we’re not talking about items you can simply sell at a pawn shop or trade at a local flea market.  Also, it is nearly impossible to elude law enforcement in a stolen ambulance, as they are easily recognizable and always GPS equipped.  There may in fact be more to this story but a logical explanation is unlikely.  As regular readers of our Blog are well aware, there are not always logical explanations to the behaviors of those leading up to an arrest.

Benjamin Herbst is a Maryland and Florida criminal defense lawyer who specializes in representing clients charged with theft, drug possession, unlawful taking of a motor vehicle, leaving the scene of an accident, driving without a license and all other criminal and traffic offenses.  He accepts cases in all state and federal jurisdictions including Anne Arundel County, Baltimore County and Harford County, and offers flexible payment plans.  Call Benjamin anytime for a free consultation at 410-207-2598.