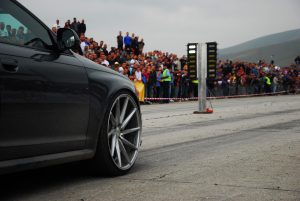 The Maryland State Police Trooper who drove up to a gathering of 50 people in the middle of a Baltimore County road last Sunday afternoon must have been caught off guard at first. However the trooper’s confusion likely wore off within seconds after realizing the crowd was actually observing the start of an illegal street race. The crowd quickly dispersed upon noticing the police presence and one the two cars involved in the aborted race fled the scene and was never caught. The other car though was not able to elude the officer, and its driver, a 26-year old man from Harford County, was arrested and charged with numerous offenses.

While street racing is illegal in Maryland it is not a jailable offense unless it results in serious bodily injury to another person. Rather racing, or even participating in the race as a timekeeper or flagman, is a payable traffic citation that carries a $290 fine and the possibility of 5 points upon conviction. The troopers that encountered the young man who was allegedly about to race his Corvette down Kelso drive could not make an arrest based on the state traffic laws.  Instead they slapped disorderly conduct and disturbing the peace charges on him and took him away in cuffs. Disorderly conduct and disturbing the peace are basically the same crimes under state law, and carry a maximum jail sentence of 60 days. The problem with these crimes is how subjective they are, and that they can include almost any type of behavior. Police officers have far too much discretion and as a result many defendants (and perhaps this defendant) are wrongfully charged.

Officers could have written traffic and criminal citations on scene and released the man, but obviously did not feel this was appropriate. He was booked and later released on his own recognizance, and in addition to being summoned for court now has deal with the embarrassment of seeing his booking photo appear on all the news websites. Although the alleged crime took place just steps away from the Baltimore County District Court in Essex, it appears that the defendant will answer for his charges in Towson sometime this summer.  It is also worth noting that there is a state police station on that same block, and the rest of the street is mostly commercial and industrial properties that are closed on weekends.

Street racing has been an area of concern for law enforcement ever since multiple bystanders were killed at a race in Prince George’s County back in 2008. Despite the danger it is now as popular as ever and the constant stream of Hollywood street racing movies and reality television shows are not helping law enforcement’s cause. Police are aware that illegal racing occurs but they often only receive calls to service after the racing is over, and busting the participants in the act is rare. The races are never planned far in advance, and the locations and start times often change numerous times. Regardless, police are always on the lookout for the combination of bystanders and modified cars, and any future bust will likely create the more headlines.

Benjamin Herbst is a Maryland disorderly conduct and traffic lawyer that handles criminal and personal injury cases in all state jurisdictions.  Contact Benjamin for a free consultation anytime at 410-207-2598.